I had a different plan for this post. The holiday events in The Secret World just wrapped up the other day, and DC Universe Online tweeted that they were extending theirs until January 12. I wanted to talk about winter holiday events – the types of events that various games put together, and then a bit about how much I appreciate it when they clearly put a lot of effort in. I took massive amounts of screenshots and had an idea of how I wanted to approach it.

Then, something cool happened during a pug (Pickup Group/Game, random players as opposed to a group of folks who know each other) in The Secret World. It’s something that has happened before but gives me pause each time it does. I don’t want this blog to turn into only “be nice” stories, but I’ve seen a few friends lament a lack of “players doing cool things” stories online. In the interest of talking more about what players are doing right, I’m going to tell my story, and save the event chatter for a different post. As a sidenote – I’m amused that the one dungeon I forgot to get screenshots of is the one involved in this story. 😛 TSWDB (awesome player-run TSW site) has some under “2013 – Krampusnacht” for those interested.

I tend to be hesitant about group content in MMO’s. Part of that is bad experiences I’ve had related to “gaming while female.” Part of that is bad experiences “gaming while new.” And part of it is bad experiences…I’m not even sure what anyone did, someone in the group apparently had a bad day and wanted to take it out on the world. It also hearkens back to my days working in retail management – if I’ve spent all day dealing with strangers being fussy at me, I’m not going to have much patience for it in my offtime. It’s a stereotype that online games are filled with jerks; but I don’t think we can discount the problems of bad behavior as “stereotype” when it’s something that does happen more often than I’d like.

Intro-to-the-story time. Each of the holiday missions in The Secret World have accompanying achievements for the players. That carrot doesn’t tempt me in every game, but when it’s a game I’m very much invested in…yep, I’ll chase every one of those carrots. 😉

So, I’m playing The Secret World during the last night of the holiday event. I’ve already gotten all the solo achieves and more of the group achieves than I’d expected. There’s still one last group achieve I’m missing, though. (For those who play, the Two Faced Mother achieve in Niflheim.)

The achieve itself is less of an issue for me than the boss mechanics – and you need to be alive at the end of the dungeon to get the achieve. The boss’s big guns include a couple different “mess this up, and you’re probably going to die; healer can’t save you now” attacks. (Boss pulls out attacks randomly at various points of the battle.) Both of these attacks do have visual cues, but they’re a pain to see when you have to run the game at low visual settings. One of them always seems to get me. It’s a windstorm; in order to avoid it, you have to run over and hide behind one of four pillars for its duration.

Active responses and dodging are pretty integral parts of combat in TSW, and in most other cases I’ve managed fine. Usually players have issue with the roaming mobs in Tokyo, if anything, and I’m fine with those guys. That’s enough babbling for the sake of “I’m really not a bad player, I promise!” The point is that for whatever reason, this one specific boss is a pain for me. And because dodging is such an important part of the game to begin with, it’s a situation that could invite “learn how to play, idiot” responses. 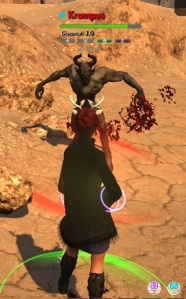 Back to the story, I see someone in the #Event chat say they’re looking for more players for a group to try for this achieve. I decide to at least give it a try. I can donate the items needed to summon that boss so at least I can help the other folks get their achieve. Did I mention that part? Just to be able to attempt this achieve, your group first needs to be in possession of nine different items dropped from randomly spawning Krampuses (Krampi?) in each of eight world areas plus one that drops from the regular dungeon boss. They’re one use items. This achieve takes a bit of doing.

First time through, a few of us die early on and the group wipes (everyone dies) to try again. Second time through, a couple of us die near the end, and the rest of the group finishes the boss for the achievement. This is fine with me, I want to stress that. I don’t feel that jumping into a group entitles me to an achievement, especially when dying is my own fault and the death is unrelated to the achieve.

The group does their thank-you’s and goodbyes and I’m about to move on to doing something else when the group leader sends me a tell (a private message between players) asking if I still need that achieve. I say that actually I do, but it’s not a big deal. The other player says they’re about to put together another group if I’d like to try again. I’d like to point out that this isn’t someone I met through a dedicated “help” channel, or a cabal (TSW guild), or a previous friend, or anything like that. While I try to be pleasant and fairly active, I’m hardly a well known player. For readers assuming it’s “because I’m a girl” there was no voicechat and TSW is one of the more balanced games I’ve played in terms of men/women playing and characters used. My character names tend to read neutral or male; if anything I run into more players assuming I’m a guy.

Anyway, this person gets the group together and just as we’re about to try again…my internet twitches and my game crashes. By the time I get back in, the group has wiped and someone is asking if anyone actually needs this achieve or if we should just get the dungeon done. Team lead responds that they know I do, at least. Someone says “So we keep wiping the group if [Gryph] dies?” And……someone else says “That works for me.” (Incidentally, happy ending here – my internet behaved and I did not die the next round.)

In this case, for this dungeon, I was the doofy player who apparently couldn’t not-stand-in-bad-things to save her life. I was holding back the team even if not on purpose. While I’m never ok with being a jerk to another player, this is exactly the sort of situation where I’m fine with “Sorry dude, better luck next time.” Instead, this pug decided to help me out.

The other nutty thing is, that’s not the first time it’s happened. Before I was geared nearly as well as I am now, there was a limited time event going on. (Whispering Tide) I had just managed the group content thanks to another awesome pug, when the group leader asked if any of us still needed to complete the solo mission. They proceeded to run me though it; with pauses to make sure I got the Lore (collectable story chunks hidden in out-of-the-way places) and got the achieves there. On another holiday dungeon this year, my group wiped half a dozen times (we were trying for the Busted Bones achieve – on Nightmare difficulty) and all of the dps died the last time. Not only did no one play the blame game, folks in that group offered to run it again on Normal after the cooldown so the rest of us could get the achievement.

I realize this got long and seems like part of a common theme for me – that the TSW community is awesome. The thing is, though, communities like that don’t just happen. TSW is not a magic game that makes its players into puppy dogs and unicorns – the players, the devs and writers, the community managers, the GM’s, and others have all worked and continue to work on having the kind of community they want. This time, I was the player getting unexpected help – other times I’ve been the player giving help to others. I remember running a dungeon during Halloween when someone joined our group hopelessly undergeared to run it on Nightmare difficulty. Our group was hunting a rare pet that only drops in NM. After seeing the new player’s gear, the group leader immediately said “Ok, how about we run you through at Normal, then?” The rest of us agreed. Any one of us could have left, saying we didn’t have time for that or told the player to go find another group, but instead we took a little time and helped someone out. 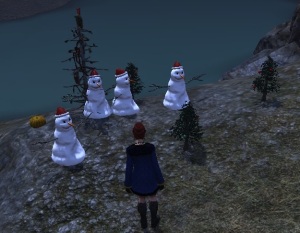 Things like this happen, and I think “what if more game communities were like that?” TSW isn’t perfect – no group of people ever is – but it leans a certain way. And the way it leans means I don’t end up with the kind of “…and then the group ragequit and disbanded after first yelling at and kicking out the healer and the lowest dps” stories I get in other games. Nothing is stopping players in other games from trying to create a different atmosphere than the stereotype.

It reminds me to take a second the next time I see someone struggling in any game, turn off my own tunnel vision for a moment, and say “Hey, do you want some help with that?” If I want more stories about players doing good things, it behooves me to get out there and do good. Not just during holiday events, either.

Anyone else have stories about awesome – or awful – pugs over the holidays?