First, I find it super amusing that Tuesday seems to be my guaranteed day to post. My other posts seem to switch days depending on my schedule, but I always seem to feel like writing on Tuesday. I wanted to use September to experiment with a schedule somewhere between the Blaugust daily posting and the once-a-week posting I’d fallen into. I’ll see if I can get more consistent days in October, but we’ll see what happens!

I don’t have much gaming to discuss because I haven’t been able to do much for about a week. Work was a string of crazy days involving massive pallets of kitty litter and countless small children at various stages of “behaving” visiting the shelter. Then I got home from work Sunday (my Friday) to discover my computer wouldn’t wake up. END_OF_DOCUMENT_TOKEN_TO_BE_REPLACED

This was too awesome not to share, despite not being about gaming!

One of the (many) cats we had while I was growing up was a black cat named Lucky. He followed my brother home from school one day (yes, for real), and we kept him. Lucky was an awesome cat who very much bonded with my brother.

Unfortunately, he ran away while our family was on vacation in Michigan. The local Humane Society called us some time after we got back, saying they had a black cat who had been found in a live trap in our area, and asking if we could come see if it was ours. When my mother went in, the black cat was smaller than she remembered, but it seemed to know her so she brought “Lucky” home.

Well, a month or so later, I was petting “Lucky” when another black cat came up to the door wearing a collar I’d never seen before. The cat outside was our Lucky, who had apparently found a new home! Plus, the second cat wound up being female – I have no idea why that didn’t tip us off at the time. I think my mother assumed we must have been wrong about Lucky’s sex in the first place? Anyway, we named her “Lucky Too” and she lived a lovely long life with us. 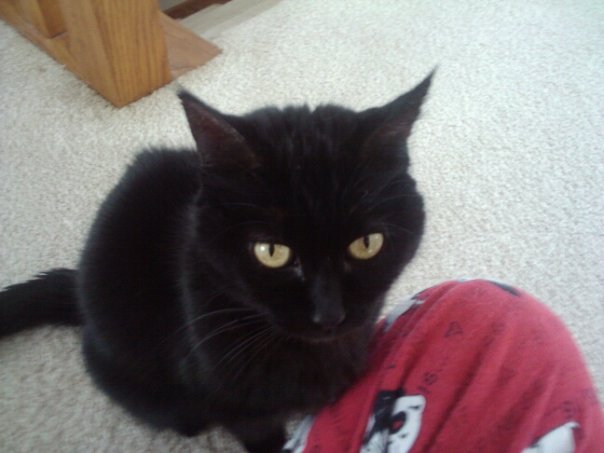 Skip ahead to more recent times. We’ve had a black cat at the Humane Society, where I now work, for a month or so. He has a small white patch on his chest, but something about him always reminded me of Lucky and Lucky Too. Maybe it was the way he gives “love bites” like Lucky used to, or maybe his face just reminded me of Lucky Too. He’s a special one to me, and I was super happy when an older couple wanted to adopt him today.

As they filled out the paperwork, we got talking about how gorgeous and special black cats are. I told my story about our two Lucky’s, ending with how we spelled “Lucky Too” – “Too” not “Two” The couple stared at me for a moment in surprise, and then told me that’s exactly what they are renaming their kitty – even down to the spelling. 🙂 They recently lost a black cat named Lucky, which was why they were so excited to see this one.

Sometimes life throws things at us that we would consider contrived in a novel or movie, and I love it. 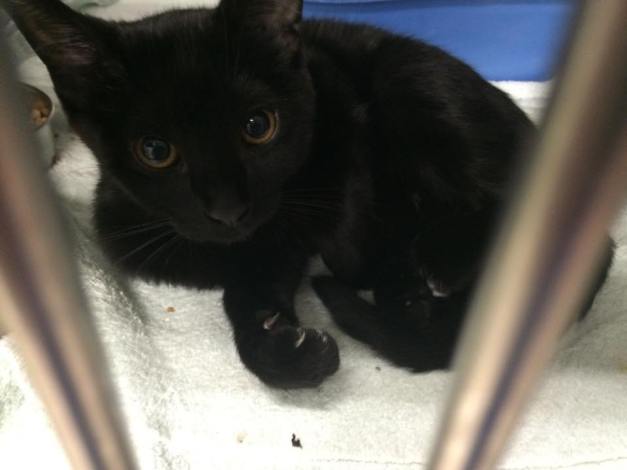 This is where I mention I 100% feel anyone who attempted Blaugust should be proud of what they’ve accomplished. Offline life happens, and no matter what you’ve had a chance to experiment and learn.  I’ve added a Blaugust Blogroll as a submenu up top there, under the About section. I encourage any of my readers to check out the blogs on the list, we have so many talented writers!

After I signed up, I made a list of topics I’d been meaning to cover. Some of them I never got around to, and some came up organically, but it gave me a base to work from. When I heard gaming news, I took a few minutes to consider whether I had anything to say on it. I also tried to read as much as I could (not nearly as much as I wanted) since that often gave me ideas, or at least got the gears moving. I made use of our writing prompts, though I tried to do so sparingly so as to only pick topics I was sincerely interested in exploring. I had notes for a few that I later scrapped because I wasn’t feeling it. I made sure to allow myself a few out-of-the-norm posts, both for fun and also because some days I just didn’t have anything else in me. I decided to try to alternate my posts, if I’d just done a research-heavy post, I planned an easier one for the next day.

I prefer writing in the evening, which works pretty well since I can spend time during the day mulling my topic over. This also makes it difficult during long work stretches, but I managed. (Though I did sleep through my alarm one morning, eep!) I tried to write any time I was home and had a lot of ideas – this meant sometimes I started an extra post after my required one, but it also helped me take advantage of the times I was super motivated on a topic.

Other than that, I kept an eye on my schedule and tried to plan for days I knew I’d be busy. I knew it would be easier for me to keep going with one a day than to catch up, so I made every effort to do that. The hardest days were when I was sick and the night I posted so late. If I hadn’t written part of my post before the podcast and surprise dungeon run, I don’t think I would have made it. Or I would have had to bow out of the dungeon which would have sucked. I had to be careful planning my Holosuite articles as well, since I try to keep them longer and more complete than I necessarily do for my regular posts. END_OF_DOCUMENT_TOKEN_TO_BE_REPLACED

Can We Just Stop Using “Fanboi/Fangirl” As An Insult?

[Announcement: If anyone missed it, my first article for Holosuite Media is live! Holosuite is the parent company for the Beyond the Veil podcast, and I am super excited to join the team as a staff writer. Article can be found here: Reboots, Remakes, and Sequels – Oh, *Facepalm*. ]

I had a different plan for today’s blog; I’d started writing my thoughts about the Silent Hill franchise and the cancellation of Silent Hills. I had an experience that bothered me while gaming last night, though, so here we are. END_OF_DOCUMENT_TOKEN_TO_BE_REPLACED

I Otter Explain My #IAMTSW Cosplay

I’ve been pretty busy with offline stuff this week, so this post is going to go out a little late. But one of the things I was busy with today was getting my entry together for the #IAMTSW cosplay contest, and I thought I’d take a moment to talk about why I went with the outfit and picture I did. END_OF_DOCUMENT_TOKEN_TO_BE_REPLACED

When I was a kid, my brother and I walked everywhere. I mean, we had bikes that I’m sure we used sometimes; but my most lasting memories are always of the two of us walking. And the memories of walking lead to memories of gaming.

My brother and I had an active imaginary life, you see. Where some kids will pretend to be Batman or a Power Ranger, we pretended to be ourselves, but cooler and in a much cooler world than the one we were slogging through to get to school or the video rental store. We were rulers and generals, mages and warriors, in a never ending battle with…Mario. My seconds-in-command were Bowser, Yoshi, and later Setzer. Our slushies were potions. You get the idea. END_OF_DOCUMENT_TOKEN_TO_BE_REPLACED

I had a different plan for this post. The holiday events in The Secret World just wrapped up the other day, and DC Universe Online tweeted that they were extending theirs until January 12. I wanted to talk about winter holiday events – the types of events that various games put together, and then a bit about how much I appreciate it when they clearly put a lot of effort in. I took massive amounts of screenshots and had an idea of how I wanted to approach it.

Then, something cool happened during a pug (Pickup Group/Game, random players as opposed to a group of folks who know each other) in The Secret World. It’s something that has happened before but gives me pause each time it does. I don’t want this blog to turn into only “be nice” stories, but I’ve seen a few friends lament a lack of “players doing cool things” stories online. In the interest of talking more about what players are doing right, I’m going to tell my story, and save the event chatter for a different post. As a sidenote – I’m amused that the one dungeon I forgot to get screenshots of is the one involved in this story. 😛 TSWDB (awesome player-run TSW site) has some under “2013 – Krampusnacht” for those interested. END_OF_DOCUMENT_TOKEN_TO_BE_REPLACED