Well, I’m a day late posting, and this will be a somewhat condensed entry. I had a doctor’s appointment on Monday – everything is fine, but we’re trying me out on a new prescription. The side effects at the moment include making my thinking awfully muddy and fairly unfocused, so I’m not exactly in a great position to think deep thoughts! I’m not entirely certain I can word coherantly at the moment, so this should be interesting.

Still, I’d like to at least touch on some of my first impressions of The Secret’s World’s Issue 11 content. This new issue came out for subs and lifetime members on May 6th, and opened up for everyone else on the 9th. (Though they decided to also allow Early Access for those who had previously bought The Fall of Tokyo pack, a great move on their part.) Spoilers ahead for anyone who hasn’t has the chance to play yet!

For reference, my gear going into this Issue was what I consider the lower boundary of high-end. My gear is all purple, but mostly 10.0 or 10.1. I have a couple 10.2 pieces, and a few of my glyphs are also in the 10.1 and 10.2 range. My aux weapons are all still green, and my highest AEGIS is at 1.6, most of them are 1.4. I have maxed out everything on the skill trees, including AEGIS skills. I have barely more than the most basic Augments and my signets aren’t anything to write home about. My primary build is AR/Shotgun despite knowing full well it’s not exactly the most ideal in all situations. 😛 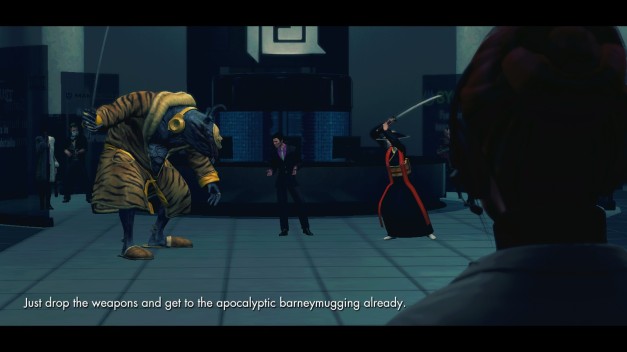 While there has been some back and forth on the forums debating whether the Dragon truly came out on top in Tokyo, I had the sense that they were running things from early into the missions. I had expected, if anything, all three of the major leaders of Tokyo to come together as part of the final assault on Orochi Tower. What I GOT was Daimon stepping in to wrangle the other two, who were far more interested in quarreling than taking command. My main is Illuminati and I could almost hear Kirstin Geary’s head hit her desk at the thought. It’s not so much what he did or didn’t do with that power, it’s the fact that he was ready and capable of taking control that bugs me as a Lumie. Obviously, if anyone was going to be calling the shots it “should” have been the one allied with me! There is no way to spin the events as a Lumie win, and I figured no one was going to be pleased about that.

I’d also like to give a nod to any game that causes me to yell at the screen, “Hey now, back away from my boy, there!” when the “boy” in question is, erm, a demon. I’m not sure at what point I decided I was alright with our Lumie connection and his constant offers of warm baths, perhaps it had something to do with him being one of the few folks who seemed to have regrets about his actions re: the Tokyo Bomb. Or maybe the talking mask won me over.

Once I got to the actual Tower, I was incredibly pleased with the effort that’s been put into the little tidbits and story fragments lying around. I’ve only managed three complete playthroughs thanks to offline obligations, but I’m definitely looking forward to exploring the floors I haven’t seen yet. The offices do feel a bit cramped at times, but I’ve got to admit that feels more realistic to me – fighting through office buildings SHOULD feel more awkward than blithely swinging a sword around in the middle of a park.

I was lucky enough to meet AImee on my first run through the Tower, and she was fabulous! Where TSW could have ended up with a GLaDOS knockoff, they instead have a unique character with her own voice, while still playing off most gamers’ inherent distrust of AI personalities. I would have liked to have spent more time with her, if her taste in games hadn’t changed.

As I advanced further into the Tower, I found the Mitsubachi more irritating than anything else…and to be fair, they really should be. If I was more often on the receiving end of Bee-re-animation I’m sure it would irritate the hell out of me. I am DEFINITELY going to have to slot some impairs into my deck if I want a chance at getting the achievement linked to that area, and I expect with lower level gear they would have been more of a challenge.

In the final fight, I was far more amused than I should have been to note that Lillith responds if you cause her to get hit by a Filth puddle, both commenting on it and walking to a different position. It’s a small thing, but one that made me chuckle.

I’m also super thrilled at the way my feelings towards John have evolved over the course of the Tokyo missions. For those who don’t know, I started Tokyo deeply uncomfortable about having taken the path of the Forged Council Seal. I didn’t know much about John at that point other than he seemed to be the Anti-Buzzing, and I was less than pleased at having accidentally fallen into something he had apparently planned for me. As the story continued, I began to feel more cautiously optimistic; and by the end I had to smile at the idea that I’d given John the courage to confront Lillith. Don’t get me wrong, I don’t completely trust him; but his character progression was handled deftly and in a way that successfully made me change my reaction to him by the end.

I think this is where I end my entry for now, and apologies for being so brief. We’ll be talking about Issue 11 during this week’s episode of Beyond the Veil, and I’m certain my brain will be cooperating better by then! We also interviewed Scriv and Tilty last week – part one of the video can be found here for those interested in hearing some feedback, explanations, and teasing from our Lead Writer and Lead Designer.