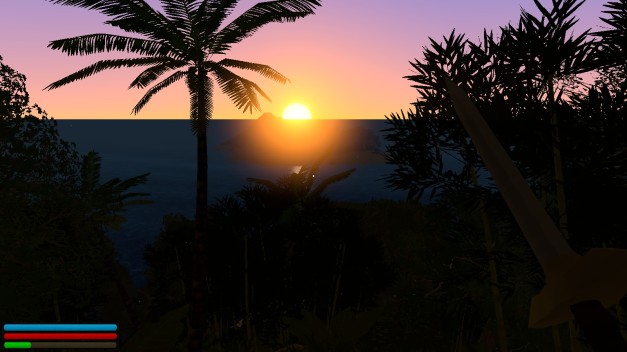 After reading Aywren‘s post a few days ago, instead of doing the sane thing and going through my own Steam backlog, I decided to pick up another game. In my defense, it sounded like exactly the type of game I’ve been in the mood for.

Salt is in Steam Early Access, not due to complete until at least Spring of 2016. That said, there’s enough game to enjoy playing, and to get the gist of what they’re doing. This is an exploration/survival game that takes place on multiple islands in a vast ocean. The Steam page describes it as:

Salt is a high seas adventure and island exploration game set in an infinite procedurally generated world. Sail across a vast ocean exploring massive islands, fighting pirates and bosses, taking on quests, building ships, and gearing up with rare weapons and armor, preparing for the next adventure.

At the moment it’s much more exploration than anything else (and I’m not complaining!). Conveniently, they offer a free demo so you can check out the game before spending your money. Your progress from the demo will transfer to the game, so there isn’t anything lost. There’s also already a Salt wiki up, so it’s easy to find answers when you need them.

One thing that drew me to the game was remembering sea adventures in Minecraft. At least on our vanilla server, sea adventures take time. There’s no skipping to the end, and you need to steer. With so many games that speed up travel (many for good reason), there was always something rather relaxing about an ocean voyage.

I began Salt on the beginner’s island. This is where the player can get used to the controls and pick up the first of their needed crafting items and tools. (Salt does have partial controller support, which seems to function just fine.) A short distance from me was a dead pirate and a treasure chest. Further exploration of the island revealed a pickaxe, logs, bamboo, fruit, and various plantlife. It didn’t take long to collect enough to build my first boat, a humble raft.

I’m usually pretty boring in games like this, spending a lot of time in the starting area collecting things. Something about the sailing theme inspired me to get out and explore much sooner than is normal for me. As you can probably tell, these aren’t realistic graphics; but it’s a style I enjoy. I’m not sure what it is, but something about dusk in this game is very compelling, perhaps because offline I love the solitude of an empty beach at dusk.

Salt has a day and night cycle, with each lasting 22.5 minutes making for a 45 minute day. Sometimes that feels fast, and sometimes it feels slow, which usually means it’s about right. 😛 Certain items and enemies vary between night and day, so there’s always something to do. The moon is also on a cycle between new and full, which I always enjoy in a game.

As I derped around on various islands, I ran into pirates (who killed me the first time), deer, abandoned hunting stands, and strange statues. I soon started practicing my skill with a bow and arrows I’d found. As Aywren mentioned, at the moment starvation does not kill you, so puttering around isn’t going to end your game.

I also randomly ran across this moonrock, which was pretty awesome. Before the spiders killed me, at least. I wasn’t playing on hardcore mode, so I respawned at my last save location, and kept all of my items. I thought about getting a screenshot of the spiders, but I know some of my readers would prefer I skip that part. 😉

Eventually, while sailing at night, I saw a glow in the distance. I already knew to follow it from Aywren’s post, and after some much needed practice steering, finally managed to reach the Innkeeper who gives quests. At the moment I am kind of questing, and kind of still just derping around. I’ve yet to try fishing, or really even much crafting despite being about three hours in.

I’m very much enjoying this game, even such an early version of it. The sailing feels right, and the exploration enjoyable enough to keep me wondering what’s on that next island. It sounds like the devs have been very communicative with players, always a plus, and have many more features planned for this game. In the meantime, the emptiness is a bonus in its own way if, like me, you’re into that kind of thing.