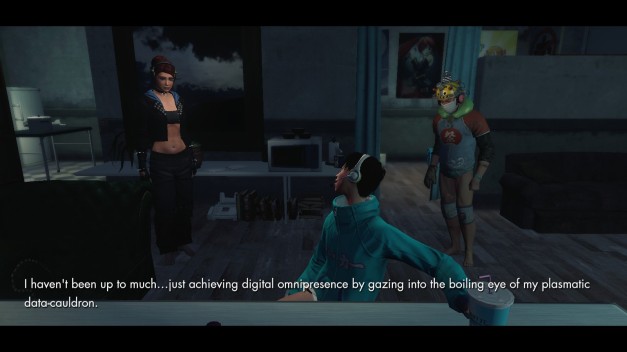 First, I find it super amusing that Tuesday seems to be my guaranteed day to post. My other posts seem to switch days depending on my schedule, but I always seem to feel like writing on Tuesday. I wanted to use September to experiment with a schedule somewhere between the Blaugust daily posting and the once-a-week posting I’d fallen into. I’ll see if I can get more consistent days in October, but we’ll see what happens!

I don’t have much gaming to discuss because I haven’t been able to do much for about a week. Work was a string of crazy days involving massive pallets of kitty litter and countless small children at various stages of “behaving” visiting the shelter. Then I got home from work Sunday (my Friday) to discover my computer wouldn’t wake up.

This wasn’t actually something new. My computer had been buggy about sleep for about half of the two weeks I’d owned it. Sometimes it wouldn’t sleep at all, and sometimes when it did, it wouldn’t wake up and I’d have to manually turn it off and on again – at which point it would act like it was waking up instead of powering on.

I’d done enough googling and tinkering by then to know this wasn’t an uncommon issue for Windows 10 and that none of the easy fixes worked for me. Turning sleep off entirely had worked for a few days, but I wasn’t surprised to see it wasn’t a permanent fix. Besides, all things considered it wasn’t the worst bug ever. Once a clean install of Windows 10 hadn’t fixed it, I was willing to wait and see what happened.

The bigger problem came after I turned the new computer on and it would no longer recognize my wireless adapter. I’d had internet issues the previous week which caused me to even miss the Beyond the Veil show, but those issues affected the whole house. This time, the card itself wouldn’t even show up under Device Manager no matter how many things I tried. When a Windows refresh didn’t solve it, I decided to just forget Windows 10 despite overall liking it, and do a factory reset.

The wireless card was still missing from Devices.

Long story short, after much troubleshooting and a friend trying to help, I decided to cart it back to the store. I didn’t want to risk voiding the warranty on a new machine by opening it up myself. I had to go out of town which isn’t incredibly convenient, but in the end things seem to be fixed now. An antenna was loose, from what I understand. I also picked up a new router while I was there which should hopefully fix the other issues.

Here’s where I get to both the best and worst parts of the story. See, through all the resets I’d left my D: drive alone. I use that one only for Steam and Steam games and didn’t want to re-download everything when I was pretty sure they had nothing to do with my issues. Only I didn’t realize Steam would want to re-install after one of those resets…and not thinking about it, I let it do so. Problem being I hadn’t backed up anything on D: including my screenshots, most of which were from that day Nassir decided to host a dance party!

I still had the few I’d saved elsewhere for my blog post, but it was a very sad realization.

After getting everything up and running last night, I decided to poke around online to see if anyone had tricks to find lost Steam screenshots. The consensus seemed to be get a data recovery program and hope you haven’t overwritten anything. I didn’t expect it to work, but found a free one that looked legitimate. The first scan didn’t find anything so I tried the deep scan option.

Happy ending here, as the deep scan found all of the screenshots! I’ve backed them up on an external drive now, something I normally would have done in the first place if I hadn’t been so tired and frustrated with all the resets. The computer has been working well since I brought it home, and I think I’ll give Windows 8 a chance before I try 10 again just to be safe.

Here’s hoping I can get to what I wanted to do with my days off, and start tinkering with OBS so I can start streaming!

2 comments on “The Computer Saga Continues!”