Gryph is Playing The Talos Principle 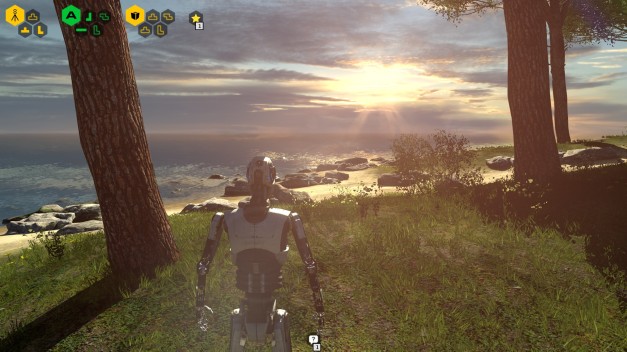 The Talos Principle is a game I was intrigued by when it first came out in December 2014. It’s a first-person puzzle game (my screenshots are not in first person, but it’s optional), which always gets my attention, and I’d heard very good things about its atmosphere and themes. I’d further heard it inspires some pretty serious contemplation about life and the Self, which always makes my ears perk.

I still held off on it for almost a year. Part of this is because it wasn’t (and isn’t) a cheap game, even for a new release. I prefer to buy my games on sale even if it means waiting a while, and tend to wait until something is at least under $20. The other part of my hesitation was due to it being in a genre I absolutely love. I can’t seem to help comparing all first person puzzle games to the Myst series. A game in this style has to work hard to impress me. I don’t say that as a good thing, either. Setting my bar at, “How I felt the first time I played Myst,” is a ridiculous and unfair comparison to make…it’s just where my mind always wants to go.

The Talos Principle sat on my wishlist until I got one of the lovely (and dangerous!) emails that something on my wishlist was on sale. I don’t remember how much of a sale it was, to be honest, but enough for me to chance it. 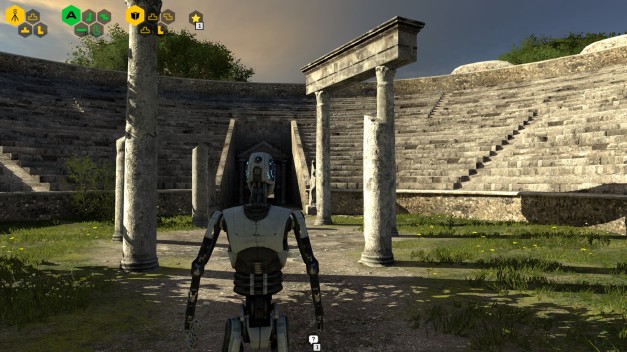 The Steam blurb reads in part:

The Talos Principle is a philosophical first-person puzzle game from Croteam, the creators of the legendary Serious Sam games, written by Tom Jubert (FTL, The Swapper) and Jonas Kyratzes (The Sea Will Claim Everything).

As if awakening from a deep sleep, you find yourself in a strange, contradictory world of ancient ruins and advanced technology. Tasked by your creator with solving a series of increasingly complex puzzles, you must decide whether to have faith or to ask the difficult questions: Who are you? What is your purpose? And what are you going to do about it?

I don’t think I’m spoiling much by saying the “you” is a robot. I wasn’t sure how I’d feel about that, either. I like scifi but I’m not in love with it as much as other things. This feels right in the game, though. And since I know nothing about this robot, plus it’s not of any particular gender, I can experience the game in the same way that being “the Nameless Stranger” helped me get into Myst. (I know, after what I opened with you’d think I’d find another comparison!)

The first thing I noticed about The Talos Principle came before I loaded up the game. The devs offer a free “prequel” puzzle game called Sigils of Elohim. I had entirely too much  fun with it – enough that I plan on playing more despite already having unlocked all the prize codes. It’s a basic, “make the shapes fit” sort of game. While I solved most of them pretty quickly, at least a couple had me stumped for a good few minutes. The game is also available for mobile devices.

Mini puzzles completed, it was time to dive into the main game. I had another nice surprise while checking out the options. The Talos Principle allows all kinds of individual adjustments, but also has a very clear option to set everything for minimal risk of motion sickness. While that never used to be a problem for me while gaming, my experience with Bioshock infinite has made me a bit paranoid.

Anyone who says this game is atmospheric isn’t lying. I’ve only visited a handful of worlds, but they’ve all been gorgeous and distinct so far. (In fact, I notice I completely forgot to get screenshots of any puzzles, thanks to being so distracted by the worlds!) I’m exploring to find secrets as I go, but also out of sincere curiosity about and enjoyment of the surroundings. There’s a lot more variety than I’d expected from the few screenshots I’ve seen. The sound design is complimentary – though I will say the wall-mounted laser turrets sound a bit like garden sprinklers to me. This doesn’t detract from the experience since it just makes it feel that much more vaguely surreal, but it is something I noticed early on.

So far (and again, I’m only a slow 3 hours in) the puzzles have all seemed fair to me. There’s only been a handful where I had to have fast reflexes, most of them rely more on your understanding of the world and how different objects affect your environment. This is fine with me. I don’t mind a little platforming or dodging in a puzzle game, but when there’s too much I tend to get frustrated. If I want to test my reflexes I’ll play a platformer. I play puzzle games for a different sort of challenge! 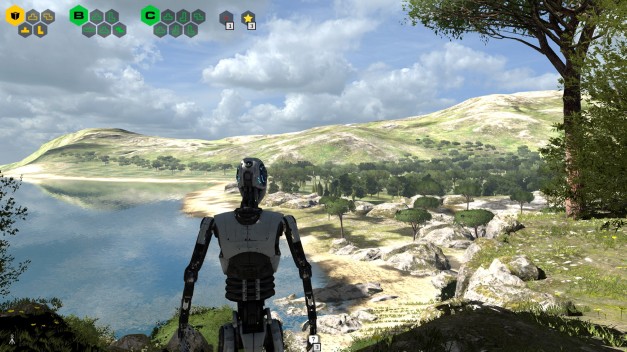 Something about this game mentioned in most reviews is the less-than-subtle religious theme. You begin the game set down in a garden with a disembodied voice talking about creating said garden for you, and the comparison is clear in other ways. I don’t think this takes away from the game at all, but I’m comfortable with both religious and non-religious content. I’m not going to be terribly mad if the story later veers more one way than another; and I feel like the game is using that theme to good effect. It’s at once strangely comforting and slightly disturbing to have a voice telling me I’ve done well, or referring to me as “child.” Do I trust this voice just because it seems all godlike, or do I reserve judgement until I have a better idea of what it is? I’m very interested to see where that thread goes, especially as I don’t plan on avoiding certain forbidden areas forever…

Speaking of story, there’s a backstory I’m uncovering piece by piece. Through bits of old emails, error reports, QR codes, and other technological flotsam, I’m slowly developing an idea of this world’s story before I was born. Created? Either way, I so love story told in bits and pieces like that. Story is as much or more of a reward to me for exploring than shinies, especially when it encourages me to read between the lines and guess at what parts are missing.

I’ve noticed the game is also very open, very early on. It was a bit daunting at first, but then I realized why. It’s the same reason that in Myst (should I make a drinking game at this point?) you could solve worlds in any order. If you get stuck and frustrated on one puzzle, or even just want a change of scenery, the game gives you the freedom to go somewhere else for a while. I’m ridiculously stubborn and prefer to push my way through all the challenges in order, but it’s good to know I’ll have options once I do hit a serious wall.

I’m loving the heck out of this game, and now that I’ve played I can say it would have been worth it even at full price. Still, $39.99 is a lot to plunk down. Croteam does offer a free demo on their site, which would be a smart idea to check out for anyone on the fence. 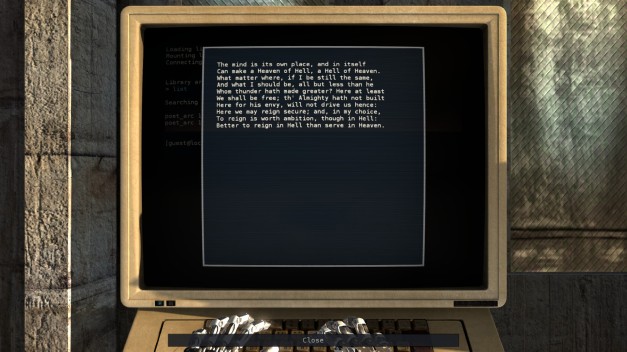 7 comments on “Gryph is Playing The Talos Principle”