I’ve spent the last few days rediscovering an older game, one that I mostly missed the first time around. The short version of its history (with thanks to Dilandau3000’s Let’s Play videos and the Uru website) is that when Uru: Ages Beyond Myst came out in 2003, the live multiplayer aspect planned for it was delayed. That live online portion continued to be delayed for official release, until finally being scrapped completely. Fans of the game and beta testers managed to keep a live version going on their own servers, and later on an official Cyan server, until it was picked up by GameTap in 2007…and then canceled. Cyan eventually got the rights back, releasing it as open source on their supported servers in 2010 as free to play. There is an option to donate towards server maintenance, but it’s not required. This back and forth is why the current incarnation is referred to as “Myst Online: Uru Live (Again).”

If you want more specifics, check out the links I’ve mentioned or run a quick Google search, it’s an interesting story. The fact that the online part of the game still exists at all speaks to not only a dedicated fanbase, but also a company dedicated to keeping it open for those fans. (There are also fan run servers, I find it extra cool that there are both.) This isn’t a F2P game with a cash shop, making money for the company  – it’s literally only running for the benefit of those who love it, and only because those fans and that company were willing to work together to make it happen. 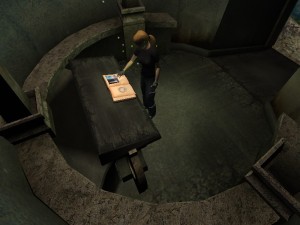 For myself, I’d picked up a copy of the game on disk years ago, not realizing that the online portion wasn’t in existence. (I have it on Steam as well because…I have multiple copies of most Myst games, actually. >_>) I’d meant to play online when it was available on GameTap, but didn’t manage to do so before it was scrapped again. Even though I’m familiar with the offline version of Uru (Complete Chronicles) the two versions are not the same. Other than the obvious that you can’t play with other people offline, the story and puzzles have some slight differences, with Uru Live also having some extra Ages not seen in Complete Chronicles.

Storywise, the game is based in a modern day (well, modern for the time it was released!) in which the Myst games were inspired by the creators of the game having visited an excavation in New Mexico. The excavation leads to the Cavern of the D’ni. The D’ni may be familiar to folks who’ve played the Myst games, they were the masters of the Art of writing and linking to Ages. You play as someone who has been drawn to this excavation for reasons you only understand as the game progresses.

That’s a super short explanation, but I’m a huge fan of the other Myst games and I’ve read the novels more than once so what I consider “basic canon” is probably more detail than most people would be interested in. 😛 If you remember Atrus’s daughter Yeesha, she plays a large role in the main storyline. To clarify, in Uru the Myst games aren’t necessarily completely factual, but they are based on people and events that are real.

Uru is exploration and puzzle based, no surprise there for a Myst game. You can play in third person view; but even though that’s usually my preferred choice, I’m loving that the first person view makes it feel so much more like a Myst game. I think the graphics are pretty nice for when it came out, but I’m hardly an expert there. I came into the game wanting something Myst-like, with better graphics than the earlier games and the ability to fully explore a world in 3d. Since that’s what I got, I’m pleased. The music is also gorgeous, incidentally – sometimes I forget how good the Myst games are about both music and background sound effects. I also love the detail work, whether it’s a series of sketches on a desk or the unique animals and insects scattered though the Ages. Uru also gets credit as one of the few games in which I can select cargo pants for my female avatar and they actually look like cargo pants, not as if they’re painted on. (Hey, I notice. I love cargo pants in real life and no, I don’t get them that tight.)

I’d also like to give the game a nod for being on the list of MMO’s I’ve played that has a dedicated group of players committed to helping newbies. In Uru, that’s done by The Guild of Greeters. I’ve not played enough to know how active they are currently, but they were certainly very active earlier in the game’s life. I freaking LOVE game communities that make a point of having groups like that.

It looks like at one time there were also a number of folks working on player-created Ages. That’s something else I’ve not had a chance to look into yet myself, but I see that the Guild of Writers still has a page up and the page has recent activity on it. (Apologies to anyone who knows more than I do about the current state of the game – this is not meant to be a thorough review, just me talking about the games I’m currently playing. Feel free to correct me in the comments!) 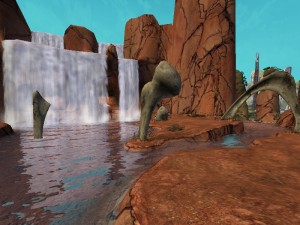 Glancing in the forums, it looks like there are still player run events happening. This is a 12 year old game that’s no longer updated by the company; for folks who assume gamers are always looking for the next AAA title…it’s not always the case. Uru’s been a little crashy for me at times; but better than I’d expect from a game that’s running without much support. I should probably warn anyone interested in checking it out that Uru is not known for great third person controls. Think old survival horror with cinematic camera angles – great for the look, less great for intuitive controls. It’s the other reason I prefer first person. There is a system in place to communicate with Cyan if you run into harassing or abusive players; I haven’t seen any, but it’s good to know they do have something set up.

This one ran a little longer than I planned for something that’s not meant to be a review. But I’ve been planning to get to this one for a long time, for a lot of reasons. 🙂 Kind of a no-brainer that I’d be interested since I’m such a fan of the other games; but I’ve also always liked talking about Uru as an example of a time that the fans and company worked together to make something happen.