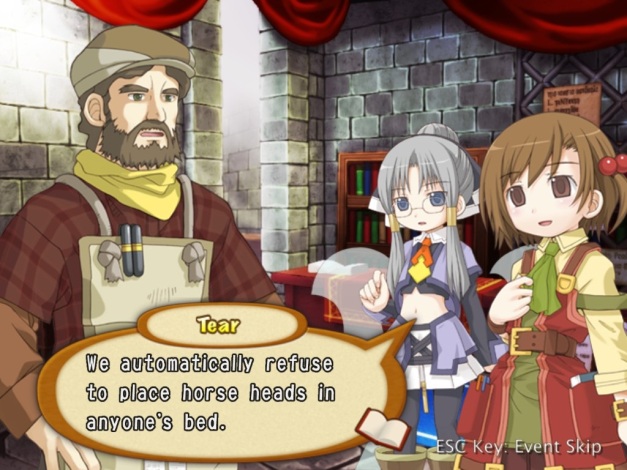 I usually try to space out the “Gryph is Playing” posts, but I’ve been meaning to cover this game for a while. Plus, otherwise you’ll be stuck with more TSW gushing. 😉

Recettear: An Item Shop’s Tale is a game I was very doubtful about back when Gremz kept tweeting about it. She’s got great taste, but a game where you run an item store? I’ve worked in retail for too much of my life already, why would I want to do the same thing ingame? Eventually my curiosity won out, and I’m glad it did.

In Recettear, you play as Recette; a young girl whose father has disappeared and left her owing enormous debts. Luckily, a faerie named Tear will be helping her earn that money back instead of just throwing her out of the house! While the focus of the game is on the shop, especially during a first playthrough, there is much more to this game than meets the eye.

Each week, you have a target amount of money to make, this amount increases each week until the end of the game. At first, you’ll only be able to buy the simplest of items from the Merchant’s Guild, but with good haggling skills you’ll be selling high quality items in no time.

Speaking of time, that’s another important mechanic in the game. Each day is split into four sections, and different actions will use up those sections. Opening the store or going into town and back only take one, while visiting the dungeons takes two. Also, certain events will only happen at certain times of day, or at certain locations, so it’s useful to check around as often as you can. With only so many periods in a week, you soon realize time management is an important skill.

Did you catch where I mentioned dungeons? That’s part of there being more to this game than I expected. Over the course of the game, you can earn Guild Cards and True Cards from adventurers, who will accompany you into various dungeons. Recettear dungeons are randomized, so they’re never the same between visits. They quickly became one of my favorite parts of the game, the artwork and mechanics feel so much like an old SNES adventure rpg I’d swear this was made for the console.

Not only that, but I soon noticed some of the healing items you can use (or keep to sell later) bear a striking resemblance to the candies and other sweets used in The Secret of Mana. Some of the enemies and the fonts used for attack numbers were also familiar. These small details came across as a fun homage to one of my favorite SNES games.

Since dungeons take so much time, and you don’t get very valuable items until you can survive higher levels, this becomes something far more fun to do in New Game+. After beating the game once, you will receive a True Card from the adventurer who had the most dungeon explorations, and retain your items and money going into the new game. This makes meeting the weekly targets much easier, leaving time to explore other things. The True Card will also make recruiting that adventurer much faster.

In fact, there are a few adventurers you can’t get on a first playthrough at all; you will have to wait until a replay. The wiki states that to collect every adventurer card takes at least 7 loops of the game. Many of these adventurers require specific actions to unlock. While you can easily beat the game with only the ones who are easy to find, trying to get the others contributes to the game’s replay value as each adventurer plays differently.

Another aspect of the game that’s more easily experienced in replays is the Fusion option. After gaining enough merchant levels, the Fusion option unlocks at the Merchant’s Guild. This allows you to learn recipes for combining items to make new ones, with different levels unlocking at appropriate merchant levels. Since some of these items are rare and/or only found in specific dungeons, it further encourages completionists like me to get out there and explore.

All that said, the simple process of running the store ended up far more fun and addicting than I’d expected. It’s ridiculously fun finding a new item to sell, or making a great profit. As you play the game, options begin to open up for store arrangement and decoration, allowing you to adjust the store’s atmosphere based on what type of customer you’d like to attract.

I haven’t even mentioned the game’s clever sense of humor, often poking fun at adventure game tropes in a light-hearted way. The major characters are memorable, and each entertaining in their own way. Plus, I very much enjoy the game’s music and sound design. All in all, Recettear: An Item Shop’s Tale is fun, charming, and strangely addictive.